My father (GRHS) fought in the Second World War and after he was demobbed (allowed to return to civilian life) he decided to stay on ‘Z’ reserve and received eight shillings (thirty seven and a half pence, or U.S. 90c) a week from the British Government for doing so.

Then came the Korean War, and as he was on Z Reserve, he was called up (drafted).

My mother and I used to go to the park and on the way, we would post letters to my father while he was in the army in Korea. The postbox was set in a stone wall, and dated from the days of Queen Victoria. It was unusual to see such an old postbox even then, and it was in part because the box was old that we posted the letters there, because we felt (or my mother encouraged me to feel) that in posting the letters from such a special box, we were somehow protecting my father from what might otherwise happen to him.

So today, when I saw this postbox set in the wall in front of a building near here, I was carried back to those days when I was a small child.

The lettering on the flap above the slot, reads ‘POST OFFICE’, or at least I can read the word POST and the last two letters of the next word, so I expect that is what it reads. From the style of the lettering I think it dates from George VI, who was King from 1937 to 1952, though it may date from his father’s reign.

UPDATE: A dear friend, Julian Barnett, tells me he thinks the box was much more likely to date from the reign of George V. And sure enough, a quick look at the records of one of the societies in England that specialises in postboxes (pillar boxes if they are freestanding) shows me that the sans-serif style of lettering was used in George V’s time. So, unless this box was a late-comer, it probably was erected/inserted, in the reign of George V.

The little half-cup shaped handle at the bottom is there, and I remember these well, because as a small child they seemed to me to be such a satisfactory design, and special, for they were only for the postman to use, as was the lock.

I remember postmen would carry a large bunch of keys or a ring that was several inches in diameter – with keys that were maybe five inches long or more, to open the various postboxes on their rounds.

The postbox is cast iron, showing the influence of the industrial revolution that made such a mark on British design.

I think that to the right of, or underneath the notice at the top of the postbox, there was once the crest of the monarch.

The notice at the top is in English and Arabic, – no Hebrew – but it does refer to Friday and Eve of Holidays, so it seems to have a Jewish connection. 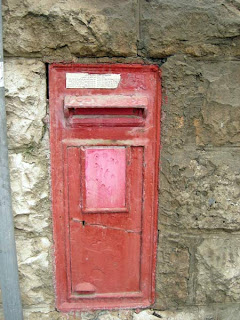