Jerusalem is about 15 miles (25 kilometres) from the Dead Sea, as the crow flies. The Dead Sea is the lowest spot on Earth at 1,400 feet (408 metres) below sea level. That is about as far below sea level as the height of the twin towers of the World Trade Center. So, the journey from Jerusalem to the Dead Sea involves a drop of about 4000 feet (1200 metres) and, of course, a long climb back the other way. Travelling by car, the desert appears within minutes of leaving the city and except for roadworks, the desert looks untamed.

The Dead Sea from Masada 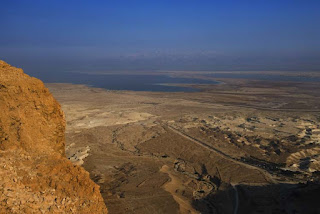