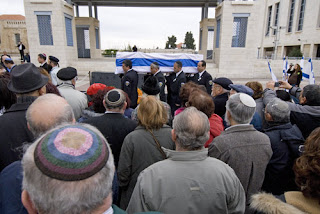 Teddy Kollek, Mayor of Jerusalem for 28 years (until 1993), died on Tuesday, January 2nd 2007, aged 95. He was buried today and before that his body lay in State in Safra Square outside the Municipal offices in Jerusalem so mourners could pay their respects. Everyone I heard there and elsewhere, had only good things to say about him. He was obviously a dynamic man, who achieved a lot for the city of Jerusalem, both while he was mayor, and afterwards. From the way people speak of him, he had a stature well beyond that of simply being described as a mayor.

Mourning Cards
As mourners came close to where his coffin was lying, we were handed small cards with a peel-off back. Mourners stuck them to the front of their jackets or coats and soon there was a sea of mourning cards in front of the coffin. The card reads “We will remember” and then below that, Teddy kollek’s name and the years he lived according to the Hebrew calendar. 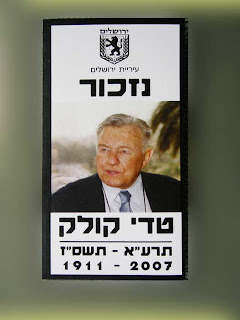 Notice Boards
The public notice boards, of which there are many around the city, were covered in death notices lodged by various organisations, including the municipality itself. This one is on Jaffa Road, just a short distance from Safra Square. 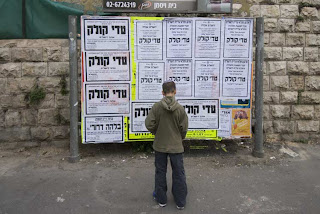 Safra Square
Safra Square was marked off with barriers so mourners could file past his coffin. 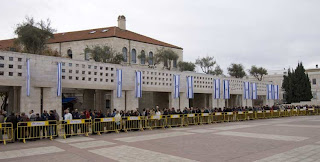 Lying in State
Jewish law requires that unless there is some supervening reason, a person is buried as soon as practicably possible.
Accordingly, Teddy Kollek’s body lay in State for part of this morning and then was buried in the Mount Herzl cemetry. 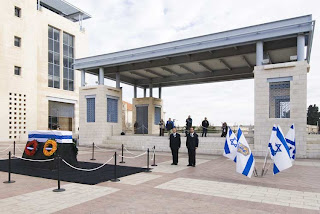 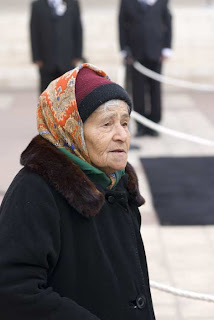 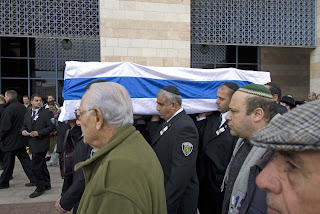