Walking around Mea Shearim (a predominantly religious area of Jerusalem), one can see people directing bill-posters as to what and where to paste up notices on the Notice Boards. And the people doing the directing are private individuals, and anyone can put a notice on a board, and the boards truly are Public Notice Boards. The bill-posters themselves are a sight to see; hands, trousers, brushes and pails dripping with fresh paste and encrusted with dried paste. And working at top speed.

What’s on the Public Notice Boards depends on which part of the city you are in.

This one is not far from Emek Refaim, a street that is the hub for a comparatively well-to-do area of the city. There are trees, well-designed houses and apartment buildings and a population the kind of cafes that are frequented by people who would feel at home in a ‘modern’ cafe or restaurant anywhere in the world. Quite a number of them are a young floating population who stay for some months and then go back home to the States or England or elsewhere. So what is being advertised reflects this modern, urban population. 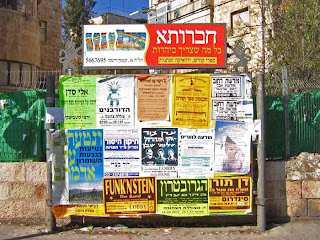 This one is in an older part of the town centre. 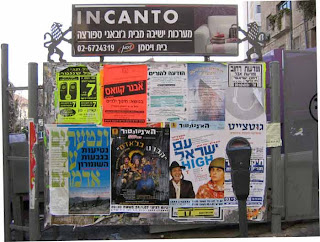 In contrast, the Notice Boards in Mea Shearim, (a poorer and predominantly religious neighbourhood) deal with different concerns. The first of the following noticese is advertising an event right at the corner where the Notice Board is. 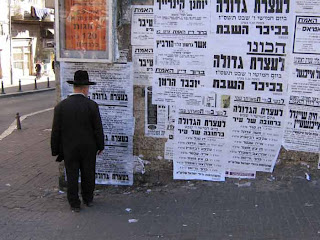 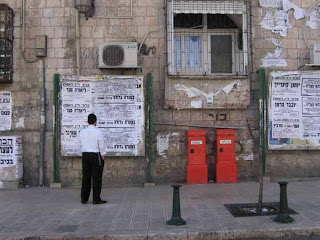 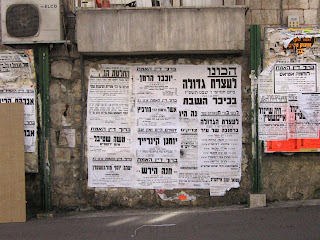 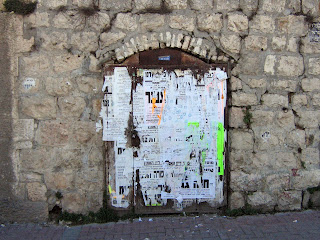 Some of the older parts of the town centre are run-down. Given the pace of building in Israel (very fast) it is not hard to imagine big swathes of downtown Jerusalem being redeveloped over the next twenty years. Whether the developers will keep the facades of the buildings is an open question. Some buildings clearly date from the Mandate period and before, with stones facades and good architectural detail. Some other buildings are on their last legs and never amounted to much. The question is whether the more deserving architectural parts will be junked along with the rest.

A light railway is being built at the moment that will go to various parts of the centre and to the outskirts, and one one side of the approach to Jaffa Gate there is a billboard showing an artist’s impression of what it will look like. (photo to follow)