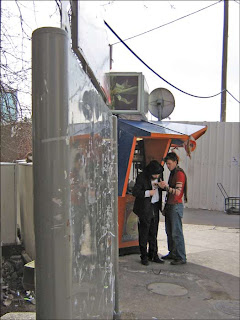 Next to a Lotto stand on a main street at the edge of town, in front of a cordoned-off building site, a young man is helped with the detail of putting on tefillin.

Tefillin comprise two leather boxes, about an inch and half along each side, with black leather straps attached to them and which contain Biblical verses. They are put on daily by Observant Jews (except on Shabbat and certain religious holidays) and are worn during morning prayer.

One of the tefillin is worn at the forehead and the other on the bicep of the weaker arm (that is, for a right handed person, it is worn on the left arm).

The use of tefillin is described in general terms in the Torah and in detail in the Talmud.