On the recommendation of a neighbour, I looked for a certain book by Amos Elon. I haven’t found it yet but I did find ‘Jerusalem: City of Mirrors” by him and in the Chronology at the front I came across this reference to Teddy Kollek. (Click on the photograph to see a larger version). 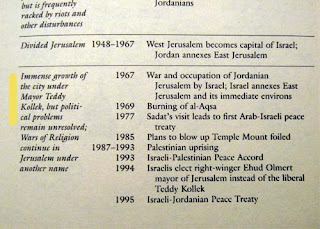 For those interested in the book, and it seems to cover the last two thousand plus years of the history of Jerusalem, the copy I have is published by Flamingo and the ISBN is 0 00 637531 6. There is a quote by Philip Roth on the front cover. He calls it “A brilliantly illuminating book”.

Sidetrack
I read “The Plot Against America” by Philip Roth when it came out about two years ago. It details the fictitious rise and fading away of mainstream political fascism in the U.S.A. in the nineteen forties. As the story lives in a parallel universe to the events which actually occurred in the U.S, but which echoes what happened in Germany, it seemed uncomfortably plausible.

Philip Roth’s next book “Everyman” describes the central character’s decay into death, his body failing around him; his desires mounting up against him. It describes his desire to break out of politeness, and give a voice to his anger and resentment and pain he feels as his health gives out, and his attempts to make an impression on a world that at one and the same time he wants and which no longer tastes good to him.