I am indebted to a friend (Nathanael Dror) who has lived here in Israel for many years, for his observations about the length of the flowering season here in Israel.

He points out that this is a relatively new phenomenon and that the long season stretching into the winter months, is bad for many plants that are accustomed to and in need of, a dormant season.

The change in the weather means that they suffer from exposure to sudden cold, and from the stress on them to grow without rest. And this problem also affects fruit that is grown commercialy, including grapes, peaches, apricots, plums, and pears.

Nathanael mentions a similar problem currently affecting cherries in Washington D.C., and with a little googling I found an article this month in USA Today which reports “Other plants, however, could have problems from the high temperatures. Maryland apple and peach growers say buds have appeared on some of their trees, raising the prospect of a poor crop if a sudden cold snap kills the blossoms”.

You can see from the shadows on this flower, that the sunlight is strong, even now in January. 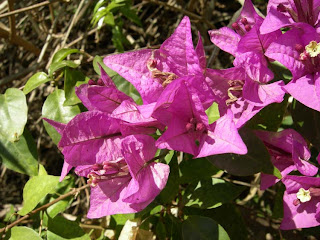 Lemons and Oranges
This little lemon tree in the garden here, is about five feet tall and has six or so lemons hanging from thin branches that hardly seem strong enough to bear the weight. It’s particularly satisfying to graze a thumbnail across the surface of the lemons and smell the tangy lemon flavour.

We waited for oranges in the local shops all the way through Autumn/Fall, wondering whether we had missed the season. But they arrived about a month ago and the shops are full of them now. 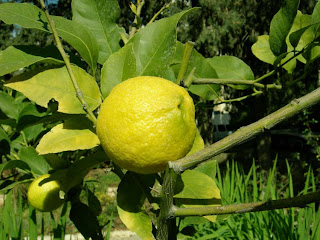 Warm Gloves
All the way through to last November (2006) it was very warm and even today in the middle of January 2007, the sun is out in full splendour. There have however been some bitterly cold days and nights. It is not surprising that there have been cold nights, because Jerusalem is on the edge of the Judean desert, and at an elevation of 750 metres (2500 feet) and the cloudless night skies allow the temperatures to drop to freezing and below. The few bitterly cold days we have had are another story though, and I have been surprised to find myself swaddled in winter clothes, gloves and scarf, heading for the warmth of the coffee bar, wondering what happened to the Mediterranean climate.