During Chanukah, people light candles to honour and celebrate the miracle that took place during the rededication of the temple, when the Maccabeean Jews led a successful revolt against Hellenised, assimilated Jews and against the Selucid Greek opression. It is customary to show the outside world that one is lighting the candles, and so they are often placed on a windowsill or outside. Of course it might rain or the wind might blow out the candles, and so they are placed in a glass-walled box. This box is still hanging by a doorway after Chanukah. There is no glass forming the walls of the box and the lights have been taken away, but the box is there. 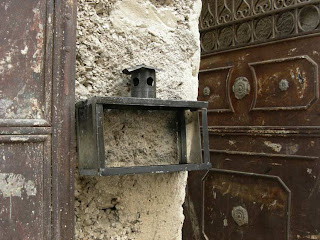 And here is the doorway where the box was hung. The doorway is a remnant of what it once was and no longer gives out into an enclosed courtyard, but now leads into a street and further into the neighbourhood. 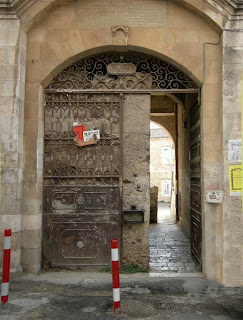