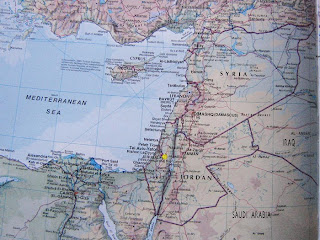 Since I was a boy I have looked at maps and tried to get a picture in my mind of where things are.

So: Israel is at the eastern end of the Mediterranean. Its longest border is with Jordan on the east and at its southern tip at Eilat, it opens into the Gulf of Aqaba.

Turn west and you are into Egypt. Travel south by sea about 25km (15 miles) down the Gulf of Aqaba, and turn east, you are into Saudi Arabia.

And in the north there are borders with Syria and with Lebanon.

So, four countries border it and the fifth (Saudi Arabia) is just a few miles down the gulf.

And the whole eastern border of Israel is a continuation of the Great Rift Valley that churns through huge distances of central Africa. Which accounts partly for why Israel is such an important place for birds; for they use the Rift Valley as a route for migrations.

And continue further south, beyond the Gulf of Aqaba and you are into the Red Sea, which according to the popular view, the Israelites crossed on their route out of Egypt 3,300 years ago. Except the Israelites crossed Yam Suf, which translates as the Sea of Reeds, and which according to the Jewish commentaries is either the delta at the mouth of the Nile or it is the Gulf of Suez, the sister gulf to the Gulf of Aqaba and which runs north-west from the Red Sea and up towards the Mediterranean east of the Nile. And which now connects to the Mediterranean via the Suez Canal.